Influential treatise on medicine from the Americas, the chief source of information on tobacco

First edition of an abridged Latin translation of Monardes's influential treatise on plants, animals and minerals from the "West Indies" (i.e. the Americas) and their use in medicine, translated and edited by Carolus Clusius. "Monardes was greatly influential in promoting awareness of the drug plants and animals of the Spanish colonies" (Landis). The treatise was originally published in Spanish in two parts (1565-1571) and includes important descriptions of tobacco, the long pepper, balsam of Peru, mechoacan and the sassafras tree. While Liebault had already published on Nicotiane in 1570, Monardes's account rapidly superseded that of Liebault in popularity and became the chief source of information on the subject in Europe.

With Hebrew inscription and traces of a removed library stamp on title-page. Small tear at the head of the title-page, the fore-edge margins trimmed short (occasionally shaving one or two letters from the side notes), several leaves browned and a small stain on the first three leaves, otherwise in good condition. 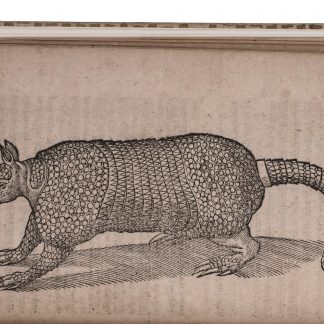