From the Auersperg fideicommissum library, sold by H. P. Kraus

The official publication of the laws of intestacy for the archduchy of Krain in the Austrian Empire. The clarity of the text is enhanced by the large engraved arbor consanguinitatis and numerous woodcut charts providing various examples of legal circumstances encountered. As author of the Pragmatic Sanction, which legitimized succession in the female line, the Emperor Charles VI may be said to have a special interest in the laws of inheritance.

Bound with this work are two decrees by Charles VI, regulating the trade in tobacco within Inner Austria (present in duplicate) as well as the trade within Krain, and a folding decree of procedural law by the Landeshauptmann of Krain, Count Saurau, signed in his secretary's hand.

Slightly browned but well preserved. Provenance: from the Auersperg fideicommissum library in Laibach with its armorial bookplate to pastedown; sold by H. P. Kraus to a private Austrian collector in the 1980s (includes Kraus's old description). 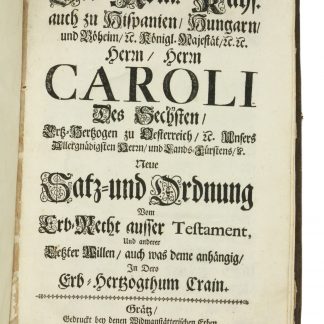