Through the Gulf to India

First and only edition of this travelogue of an extensive journey through the Middle East and India, undertaken in 1671-75 by the young Italian physician Angelo Legrenzi (1643-1708) from Monselice. His manuscript is preserved in the Austrian National Library (cod. 12711 suppl. 315).

Legrenzi, a Venetian surgeon, set out for Aleppo on 15 August 1671, after the end of the Cretan War (1645-69), and spent over 20 years travelling the East. The first volume relates his peregrinations across the Palestine, including visits to Antioch, Tripoli, Acre, Mount Carmel, Bethany, Jerusalem, Nazareth, and elsewhere; Cyprus is described at pp. 17-21. The second volume concerns his subsequent travels through Anatolia, Mesopotamia, Persia, and India, including descriptions of the cities of Gaziantep, Sanliurfa, Diyarbekir, Tikrit, Baghdad, Isfahan, Shiraz, Bandar Abbas, Surat, Aurangabad, Agra and Delhi. A separate chapter ("Della navigatione all'Indie per il seno Persico", pp. 184-191) describes at length his sea route to Mascat and India via the Arabian Gulf. Legrenzi's account has been compared to the "Viaggi" of Pietro della Valle, but is much rarer, and was never reprinted.

Binding rubbed and bumped. Some browning throughout; a few edge and corner flaws, including a larger paper defect on p. 168, part 2, resulting in a partly unprinted page. Extremely rare; OCLC traces ten copies in libraries worldwide, none in the UK. 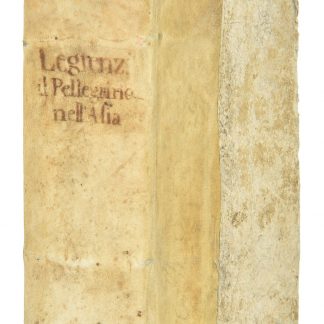