8vo. 1½ pp. on bifolium. Followed by 1½ pp. by his wife Louise-Nicole-Charlotte.

To Henri Bertrand, father of Henri-Gatien Bertrand (1773-1844), relaying news about his son in Egypt from Napoleon Bonaparte's younger brother Louis. Malus writes that he just left from visiting Louis Bonaparte who instructed him to tell Bertrand that his son, who would eventually become Aide-de-camp to Napoleon Bonaparte, was promoted commander of the fortifications in Cairo. On his own behalf Malus expresses great satisfaction to know of his son's friendship with such a distinguished officer. Louis Napoleon had offered to forward Betrand's letters to Egypt therefore Malus sends him Napoleon's and his own address in Paris.

In an attachment to the letter written in Chantilly and dated to the 12 Germinal, Malus's wife Louise-Nicole-Charlotte adds that Louis Bonaparte's offer to forward letters via his brother is very valuable to her, since all previous attempts to communicate with her son had failed. She promises to pass on any information about Henri-Gatien Bertrand that might reach her and expresses her hope that the recipient would do the same regarding her son.

Since the decisive Battle of the Nile from the 1st to the 3rd of August 1798 the British Royal Navy had reestablished its dominance in the Mediterranean. The French "Armée d'orient" in Egypt was subsequently cut off from supply and most communication. The letter is a testimony to the dramatic effects of the loss of the French Mediterranean fleet on Napoleon's Egyptian campaign.

Anne-Louis Malus Dumitry's son Étienne-Louis Malus was trained to become a military engineer at the École royale du génie de Mézières and the École Polytechnique in Paris. In 1796 he joined the Engineers Corps of the revolutionary army and quickly ascended the ranks. His scientific career started during the Egyptian campaign when he became a member of the newly founded Institut d'Égypte. Malus's mathematical work was almost entirely concerned with the study of light; he is known for Malus's law, giving the resultant intensity, when a polariser is placed in the path of an incident beam. 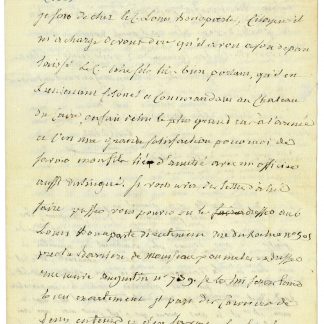