A scholar's handwritten reference manual on Arabic grammar, dated according to paper and script. Although the manuscript was probably intended to be illuminated, the only decoration that was carried out consists in the red rules that frame the text.

Written on strong, wide-margined laid paper with a crescent watermark not recorded by Piccard or Briquet, but similar to a set of watermarks used throughout central Europe during the 16th century. While a written leaf has been removed from the middle of the manuscript, the text proper is entirely complete according to the catchwords (the missing leaf would appear to have contained some other text, perhaps a commentary). An empty space on the first page has been reserved for an 'unwan headpiece; at the end there is an undated colophon. On the lower endpaper is a handwritten glossary of Ottoman Turkish words (likely penned somewhat later) with translations into a probably Eastern European language, likewise written in Arabic script - a fact which would suggest that this manuscript originated on the western fringes of the Ottoman Empire. This notion is supported by the binding, whose hand-drawn design of closely meshed tendrils and scrollwork are either of western origin or show western influences. 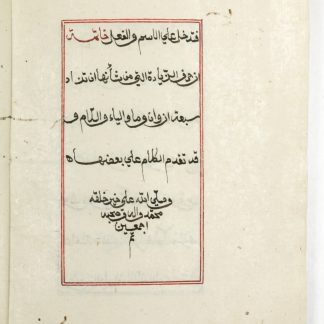