Only published edition of the original version of the "Kitâb-I Bahriyye" (Book of the Sea) by the great Ottoman navigator and cartographer Piri Reis (1465/79-1553). After assembling two important maps using numerous sources (in 1513 and in 1528), including a map drawn by Columbus, Piri Reis decided to collect "all his own observations and all previous information that he could not fit onto the maps" in a book. "It is basically a naval guidebook with essential data on the most important coastal routes and large maps and detailed charts [...] The main portion of the book is devoted to the Mediterranean coasts and islands [...] Piri first gives historical and geographical information and then discusses the necessary practical navigational data. The accuracy of many of his statements is indisputable" (DSB). The final chapter of the book describes the newly discovered continent Antilia "the mountains of which contain rich gold ores and in the seas, pearls [...] The chapter on the Western Sea contains all that was known about the discovery of America at the time" (DSB). First written in 1521, the manuscript was reworked in 1526 for presentation to Sultan Suleiman the Magnificent. This later manuscript was published twice, in 1935 and 1998, but Piri's original version is still only available in the current edition by the German scholar Paul Kahle (1875-1961). The first volume (in two bindings) is a facsimile of a manuscript in Bologna containing Piri Reis's 1521 text, with a few pages from a manuscript in Dresden in between. The second volume is an annotated German translation of the text, based on these manuscripts as well as on a manuscript in Vienna. This is still considered the best translation of the Bahriyye.

Bindings slightly soiled with the spines discoloured and slightly damaged; covers of the second part of vol. 1 almost completely loose but the book itself still structurally sound. In good condition, with vol. 2 still unopened. 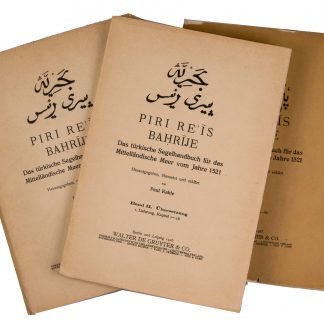