A beautiful, complete mediaeval Bible written in a miniscule bookhand on extremely delicate vellum, probably copied in England or commissioned from there. As is common, the Bible is prefaced with the epistle of St Jerome to Paulinus (53: "Frater Ambrosius [...] moriturum", fols. 1r-3r), followed by Jerome's prologue to the Pentateuch ("Desiderii mei [...] in latinum eos transferre sermonem. Amen"); the text of Genesis begins on fol. 4r. The Second Book of Kings is followed by the Book of Isaiah (139v) and the Prophets; on fol. 227r follow the Book of Job and the Poetic Books; 287v ff. contain the Books of Chronicles and the historical books to 2 Maccabees; the New Testament begins on fol. 351r.

Some page headings and penwork flourishes slightly trimmed, still an uncommonly wide-margined specimen. Occasional flaws in the vellum were carefully avoided by the scribes. The margins contain numerous contemporary and later annotations in what appear to be four different hands (a number of which are also very slightly trimmed), some exceedingly delicate: one 8-line annotation measures no more than 10 mm! The early marginalia would appear to be in a 15th century English hand; at least one (at the lower edge of fol. 41v) is an extract from the Psalm commentary of the Yorkshire mystic Richard Rolle (d. 1349). Furthermore, the plummet lines along many of the earliest marginalia, but also the order of the Old Testament Books, uncommon for a French Bible, suggest an English provenance. As the continental hands of the later annotations show, the Bible must have reached France or Germany in the later 15th century.

Professional repairs to spine-ends and one corner of the fine Renaissance binding. First and last quires a little browned and dust-stained, very slight worming to beginning, occasional, largely insignificant waterstains to margins, a few edge cuts and cut-out sections in the blank margins. An old edge repair to fol. 155, fols. 310-323 as well as a few others more strongly browned and wrinkled, but generally in fine state of preservation. 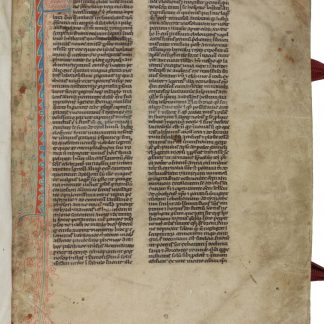