First Spanish edition of the first emblem book, expanding the earlier editions to the nearly definitive form, with 200 woodcut emblems

8vo. 256, (6) pp. With the title and imprint set in type in the cartouches of an elaborate woodcut architectural frame including atlantes, grotesque faces, garlands of fruit, etc., and Rouille's woodcut eagle and snake device in an oval window in a pendant hanging from the title-cartouche; 210 emblems (200 with woodcuts); nearly every page (with or without an emblem woodcut) in one of about 34 different richly decorated woodcut frames (generally in four pieces made for use together). There are 6 additional small woodcuts (plus many repeats), usually used as tailpieces, and 5 woodcut decorated initials (3 series of roman capitals in white on a pictorial background). Set in roman and italic types (some by Robert Granjon) including several of the earliest italics to use sloped capitals. Early 18th-century (Spanish?) sheepskin parchment, sewn on 2 supports, with a hollow back, with the title in manuscript across the head of the spine.

Rouille issue of the first Spanish edition of the first emblem book, by the legal scholar Andrea Alciato (1492-1550) in Milan, first published in Latin at Augsburg in 1531 with only 104 emblems (97 with woodcuts), but greatly expanded up to the author's death. The present edition has more emblems and more woodcuts than any earlier edition, also more than the French and Italian editions by the same publishers in the same year and more than the competing editions by De Tournes. It brings the work nearly to its definitive form. The Macé issue of the present edition is identical except for the imprint and device on the title-page. Alciato not only produced a work that was to continue through hundreds of editions over the centuries, he invented a whole new genre, the emblem book, which combines allegorical images with a brief motto that aims to give the core of the idea and explanatory text (here in verse), the combination of text and image intended to give more meaning to both and to encourage contemplation by the reader.

The first authorized edition, published by Wechel at Paris in 1534, expanded the first edition and included 113 emblems. Aldo Manutio published a second volume at Venice in 1546, but it was in Lyon that the two volumes were first published together, by two competing firms: De Tournes produced an edition in 1547 with 113 + 86 = 199 emblems, but the 86 in the second volume have no woodcuts; Rouille (publisher) and Bonhomme (printer) produced an edition in 1548 with 201 emblems (128 with woodcuts). On 9 August 1548 they also received a privilege for translations into French, Italian and Spanish, and as these appeared they continued to expand the work. The present first Spanish edition of 1549 (one year before the author's death) therefore contains 210 emblems (200 with woodcuts). Ten emblems (all with woodcuts) therefore make their first appearance as emblems in the present edition, and it omits only 2 emblems published earlier: one that was considered obscene and another omitted for unclear reasons. These 212 emblems were to remain the definitive set for future editions. In most respects, the present Spanish edition follows the 1548 Latin edition but Bernardino Daza who translated it into Spanish claimed to have followed a printed copy with corrections in Alciato's hand, making the present Spanish text an essential source for the author's intentions, rather than just a translation.

Most of the emblems are based on episodes in classical literature, so that their woodcuts depict those scenes, but one shows a map and 14 show quite detailed botanical illustrations of different species of trees: these were cut for the great botanist Leonard Fuchs, De historia stirpum commentarii insignes, which also appeared in 1549.

Except for these trees, the emblem woodblocks are believed to have been cut by Pierre Eskrich. Many appeared in Bonhomme and Rouille's 1548 Latin edition and were based primarily on those cut by Bernard Salomon for Jean de Tournes's 1547 edition, but Eskrich made revisions and additions of his own and as the editions expanded he cut further blocks not based on Salomon. Of the 34 woodcut frames, at least 12 are signed, all with the initials "PV", identified as Pierre Vase, another name used by Eskrich. These present a tremendous wealth of grotesque faces, atlantes, caryatids, fantastic beasts, plants and various kinds of abstract ornament. Some show a single scene interrupted by the space left for the emblem and text (one shows a large ship, two show landscapes, etc.).

With several early owners' inscriptions, some struck through; a ca. 1815 bookseller's engraved label of Théophile Barrois, fils, libraire, Quai Voltaire, n°. 11, Paris, on salmon-coloured paper (35 x 54 mm); and an engraved armorial bookplate of the Dublin-born physician in Paris, Sir Robert Alexander Chermside MD (1787-1860). Lacking the final blank leaf R4. As in many copies, the descender of the 9 in the imprint date "1549" has not printed, so that the date looks like "1540" (this has lead to frequent references to a ghost edition of "1540"). A fraction of a millimetre has been shaved off the head of the woodcut frame on the title-page, there is a long tear along the gutter fold of bifolium O1.8, a couple corners of leaves torn off (not approaching the text or woodcuts), a tiny hole in the title-page, occasional and mostly marginal stains and a few marginal reinforcements. In spite of these defects, most leaves are in good or very good condition. Macé's presswork is somewhat inconsistent, but this has more effect on the woodcut frames than the emblem woodcuts (and since the frames repeat, one can generally find an example that has printed well). 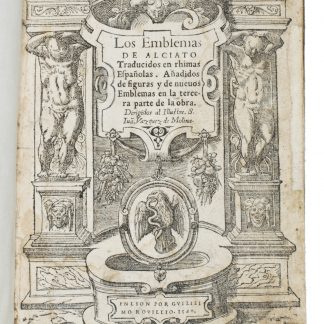