340 pencil drawings, drawn by Alfred Hitchcock, one drawing highlighted in blue, each sheet with three boxes (or cells) with 3 pencil sketches, 46 cells are left blank and 22 drawings were crossed out. Numbering in the left-hand margin in pencil and red crayon (1-152, 240-293, plus 8 leaves numbered in Roman numerals at the end for the final scenes: pursuit in the theatre; decapitation by the theatre's security curtain and final scene), autograph annotations, directions and revisions throughout, one or two "camera angle" diagrams sketched out on left-hand pages. In all 130 loose sheets (208 x 262 mm), in pencil, mostly only recto, but three leaves are drawn also on verso. Sketch of a profile behind scenes 103 and 104; sketch of a stage setting behind scenes 98 A, 98 B and 99. Original black cloth folder-binder, blindstamped with paper label on the front cover and inscription "J. Martin" in faded red ink and "Stage Fright / R. Todd / M. Dietrich / M. Wilding" in blue ink. Preserved in a fitted case.

Extraordinary autograph pre-production storyboard for Hitchcock's 1950 film "Stage Fright", comprising preparatory sketches for some three quarters of the film, including the infamous "false flashback" initial sequence, the rest of the first half of the film, the garden party scene and the finale. A rare collection of sketches and comments detailing how the legendary director crafted his scenes.

"Stage Fright" is a 1950 British noir thriller directed and produced by Alfred Hitchcock and starring Jane Wyman, Marlene Dietrich, Michael Wilding, and Richard Todd. The film was shot in London and Elstree in 1949, on a brief sojourn from California where Hitchcock had been working since 1940, and in some ways it was a return to the style (and humour) of his earlier British films. The crime thriller, centered on a killer who dupes a woman friend into helping him try to escape police after he murdered his actress lover's husband, was much criticised on release for the extraordinary "unreliable flashback" or "false flashback" scene, which Hitchcock famously considered his second greatest career mistake (after the death of the little boy in "The Secret Agent"). Posterity has been rather kinder: the device has influenced later generations of filmmakers more interested in artifice than truth, and the film as a whole has seen a partial critical reassessment in recent years.

Hitchcock had trained as a draughtsman and worked in advertising before turning to film, and his use of extensive storyboards, down to the finest detail of production, is well known. One of the myths to have built up around his career maintains that, after planning and storyboarding his films so thoroughly, once on set Hitchcock never so much as peeked through the camera viewfinder, bearing each scene from start to finish precisely in his head.

The sketches for "Stage Fright" include very precise directions for the actors and for camera angles which would have left the crew with little room for imagination ("pan up from stain", "CU" (close-up), "Dolly in to a dolly", "Back to Eve. Pan then out until the couple are in waist-shot going through the door"). Some of the most memorable shots of the film were clearly planned in advance and can be seen here: the car driving up to the camera at the beginning, the first shot of Alistair Sim framed in a lead window, the blood-stained dress shots, the blurring as Doris Tinsdale tries on her glasses, the umbrellas at the garden party and the finale with the stage curtain. But at the same time there are significant differences from the finished film, and this storyboard demonstrates that sequences and shots were dropped, added or amended during production.

The production files for all the other post-1940 films are in the Hitchcock Archives at the Margaret Herrick Library, Academy of Motion Picture Arts and Sciences, Beverley Hills.

Includes a signed portrait photograph of Hitchcock at work on the storyboard drawings of his first American film, "Rebecca", in mid-1939, with Daphne du Maurier's novel opened before him and strewn with the cards on which the director would set out in sketched illustrations every detail of the film as he envisaged it. 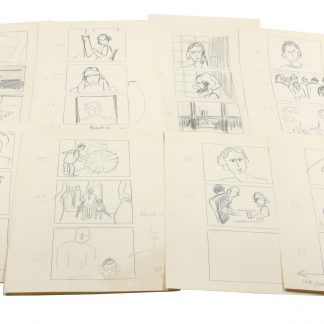