First edition. "One of the most beautifully printed treatises on military architecture of the entire century" (de la Croix). Alghisi worked for Ercole II and Alfonso II d'Este of Ferrara as both a civil and military architect, constructing churches and theatres as well as fortifications. He took a theoretical approach to fortress design, describing the plans for fortresses with increasing numbers of bastions, reaching the astounding number of 21 (the fortress of Palmanova was unusual in having as many as nine). Bastions had become an increasingly important element of fortifications during the 16th century as a result of the need to provide defence against cannon fire which tall medieval towers failed to do (providing, as they did, a large area for the cannon to target). Bastions were lower, thicker and provided a means for the defenders of a fortress to overlook the attackers from a platform large enough to hold cannons of their own.

Some brownstaining; rust mark on pp. 174-175 from a pair of scissors. A few engravings shaved. Joints cracking, spine-ends chipped. Provenance: from the collection of Thomas Fremantle, 3rd Baron Cottesloe (1862-1956), commander of the Territorial Army and president of the Society for Army History Research. 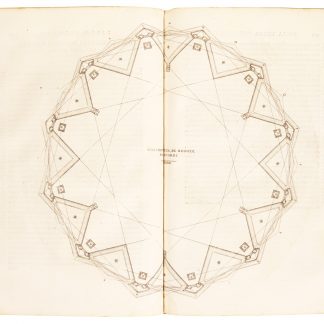