Rare treatise on artillery by the mathematician Rivault (1571-1616), a scholar of classical and oriental languages and tutor to the young king Louis XIII. Includes the first written account of the capacity of water to explode a bombshell when heated - a discovery that is regarded as one of the steps leading to the invention of the steam engine. Dedicated to the Huguenot Maximilien de Bethune, later the Duke of Sully. The illustrations mostly depict ballistics, sometimes showing cannons as well. Copies containing 3 or 4 plates result from cutting the second plate in two or three pieces. In this copy, the second plate was cut as well, but merely the middle part is present in the volume. An expanded edition with new material on guns and gunpowder, but without separate plates, was published in 1608.

Binding soiled, foot of lower joint starting. Provenance: from the collection of Thomas Fremantle, 3rd Baron Cottesloe (1862-1956), commander of the Territorial Army and president of the Society for Army History Research, with his bookplate to front pastedown. Rare; a single copy in the United States (New York Public Library). 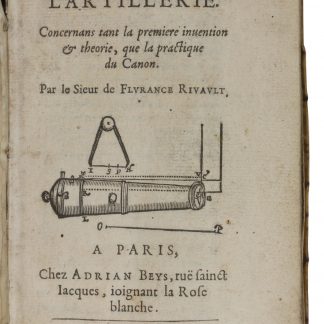