Italian edition of Caesar's "Commentarii de bello Gallico" and "Commentarii de bello civili", using Francesco Baldelli's twenty-year-old translation, with engraved plates by Andrea Palladio depicting most of Caesar's campaigns, including the famous siege of Alesia. "In the preface, Palladio explains that the illustrations had originated out of a project he had set for his two sons, Orazio and Leonida. Palladio decided to complete the project and publish the illustrations after the death of both his sons ins 1572. Pallado dedicated the book to Giacomo (Jacopo) Buoncompagni, the natural son of Pope Gregory XIII" (Witcombe, Copyright in the Renaissance [Leiden 2004], p. 265). In his introduction, Palladio notes that while fortifications are all very well, a determined army will always overcome them, and it is better to train an army properly along the lines of the Roman army (as Machiavelli had also stated), just as in architecture the Romans had not been surpassed by later generations (cf. J. R. Hale, "Andrea Palladio, Polybius and Julius Caesar", Renaissance War Studies [1983], pp. 471-486). 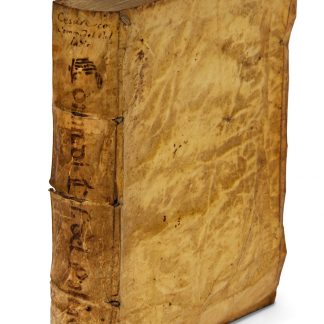