Important scholarly edition, the first (and only?) one to contain the extensive commentaries by Johann Gottlob Schneider (1750-1822). One of the most important mediaeval works on hawking, "still one of the best" (Harting), and an important ornithological and zoological work in general, written by the Holy Roman Emperor Frederick (Friedrich) II (1194-1250). Frederick developed an enthusiasm for falconry in Italy and brought experts back from the Middle East when he returned from the crusades in 1239. His treatise discusses the capture, care and feeding, training and use of hawks, as well as the equipment, and was largely responsible for the spread of Middle and Near Eastern falconry through Europe. Frederick's text was first printed in 1596, but the present edition is “preferable à cause des excellentes motes de Schneider” (Thiébaud). The six plates show anatomical drawings of birds of prey, including a skull and skeletons. “By far the greatest contribution to zoology was due, mirabile dictu, to the Emperor Frederick II. His treatise on falconry, De arte venandi cum avibus, was completed by 1248 […] It is an astounding work, taking into account the Greek and Arabic literature on the subject, but essentially based upon the author’s own observations and experiments, and upon the information elicited by himself from his Muslim advisers. It set forth a number of new anatomical facts […] and discussed bird migrations and the mechanical conditions of flight. Frederick even instituted experiments to determine how vultures were attracted to their prey […] I said that Frederick’s knowledge was partly derived from Muslim writings. Indeed an Arabic treatise was translated for him by his astrologer and secretary, Theodore of Antioch, and another in Persian was also known to him” (Sarton). It is followed (vol. I, pp. 175-198) by another celebrated 13th century treatise on falconry: Albertus Magnus’s "De falconibus asturibus et accipitribus". It was originally part of his "De animalibus", where it comprised more than half of the text. "De animalibus" was first printed in 1478 and this part was included in the 1596 first edition of "De arte venandi cum avibus". Volume II contains Schneider’s commentaries, with a six-page Latin-German glossary of technical terms, a 20-page review of the literature, and an index.

With a modern armorial bookplate of the Verne d’Orcet family (barry of 7, sable and argent) at Château du Veuillin in Apremontsur-Allier (Nivernais), whose great library on the subject of hunting was begun ca. 1900. Volume I and the second half of vol. II slightly browned with occasional foxing or spots, but otherwise in good condition. The binding is slightly scuffed, the hinges worn with some cracks, and the foot of the spine damaged, but the book block is structurally sound and the tooling on the spine is well preserved. The greatest early work on hawking and falconry, in its most thoroughly annotated edition. 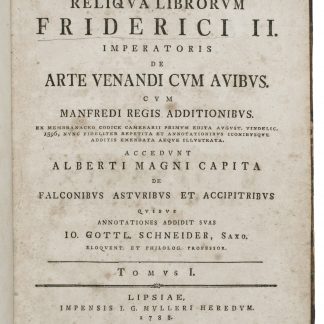