With 8 woodcuts made for the 1634 edition (a hunting scene using falcons, and 7 birds of prey)

Rare fifth edition, the first published outside of Paris, of a concise practical handbook on the choosing, training, care and feeding of birds of prey for hunting, by the falconer to Louis XIII, first published in 1620. "Copies of this work [in any edition] are very difficult to procure" (Harting). The hunting scene on the title-page, which has no related illustration in the first edition or in d'Arcussia, shows two men in the foreground, one blowing a horn and with a dog on a leash, the other holding a falcon and with hawking paraphernalia. It shows falcons attacking birds in the sky, and a hunting scene with dogs and men on horseback chasing a stag in the background.

With the modern armorial bookplate of the Verne d'Orcet family, whose great library on the subject of hunting was begun ca. 1900. With a few minor stains and faint offsetting, but still in good condition, the binding with very slight wear to the fore-edge corners, but otherwise fine. A rare and important practical hondbook on falconry, illustrated with the woodcuts of the second (1634) edition, including a hunting scene not in the first edition. 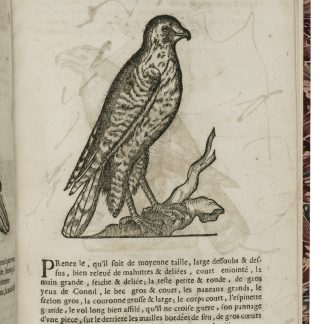