Sixth and final edition of this manual of English hunting law, first published in 1727, deemed "still more useful and satisfactory" (p. 3 of the preface) than its predecessors. Opening with an introduction describing the history of English game law from the time Britain was under Saxon rule, when there "was such plenty of game, that there was no occasion for restraining laws to preserve them" (p. IX), until the reissue of the 1217 "Charter of the Forest" in 1225, the treatise explains key terms of hunting law in alphabetical order, describes exemplary law cases, and discusses when, where and by whom which animals can be chased, and in what manner offenders are proceeded against. The present copy includes the 8-page appendix, giving two acts relating to doves and fish that were passed shortly after the book was printed, which is lacking in some copies of this edition.

Extremities slightly rubbed; hinges cracked. Paper evenly browned throughout. Contemporary ownership of J. Kilsby, dated 1775, to title-page; later in the collection of Charles Henry Stanley Garton (b. 1920), his ownership, dated Kingswood, May 1946, to front pastedown. This edition not seen at auction since 1962. 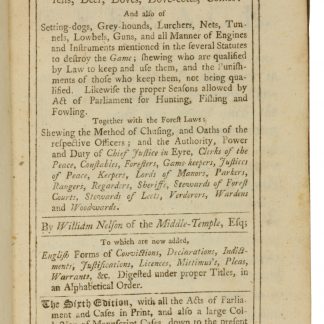