The first printed eyewitness account of any place in today's UAE: the Hakluyt Society's edition

Varthema, Lodovico di / Jones, John Winter (transl.). The Itinerary of Ludovico di Varthema of Bologna from 1502 to 1508. Translated from the Original Italian Edition of 1510, by John Winter Jones F.S.A. in 1863 for the Hakluyt Society. With a discourse on Varthema and his travels in southern Asia by Sir Richard Carnac Temple.

First Hakluyt edition (one of 975 copies, this one unnumbered), reissuing an 1863 translation of the original Italian edition of 1510.

Varthema's "Itinerario" contains the first printed eyewitness account of any place in today's United Arab Emirates: on his return journey from Mecca (which he was the first Westerner to describe), Varthema visited Ras al-Khaimah ("Giulfar") and portrayed the city as "most excellent and abounding in everything", with "a good seaport", and whose inhabitants are "all Muslims". While Montalboddo's famous anthology of discoveries, printed in 1507, contained the first printed reference to the Arabian Gulf region, it was Varthema's work, published only three years later, that offered the first actual report from the region by a Western traveller who had visited the coast.

A gentleman adventurer and soldier from Bologna, the author left Venice at the end of 1502. In 1503 he reached Alexandria and ascended the Nile to Cairo, continuing to Beirut, Tripoli, Aleppo and Damascus, where, adopting Islam and taking the name of Yunas, he joined a Mameluke escort of a Hajj caravan and began the pilgrimage to Mecca. Thanks to his knowledge of Arabic and Islam, Varthema was able to appreciate the local culture of the places he visited. Impressed and fascinated, he described not only rites and rituals, but also social, geographical, and day-to-day details. After embarking at Jeddah and sailing to Aden, he was denounced as a Christian spy and imprisoned. He secured his release and proceeded on an extensive tour of southwest Arabia. Stopping in Sanaa and Zebid as well as a number of smaller cities, he describes the people, the markets and trade, the kind of fruits and animals that are plentiful in the vicinity, and any historical or cultural information deemed noteworthy. Returning to Aden, and after a brief stop in Ethiopia, he set sail for India.

The present edition is accompanied by a "Discourse" by Sir Richard Carnac Temple, in which he traces Varthema's route and "deals at length with [the] question of Varthema's credibility, and comes to the conclusion that he was truthful, yet capable of making mistakes" (The Geographical Journal 73.1 [1929], pp. 79-81). 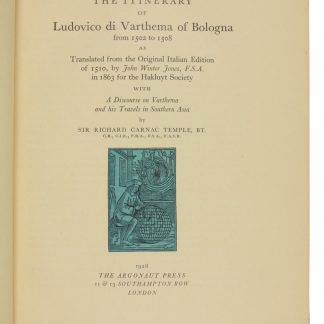