First and only edition. An "excellent facsimile publication" (cf. Souhart) of the famous Book of St Albans, the last of eight books printed in England by the St Albans Press in 1486, containing three essays on hawking, hunting, and heraldry. Prefaced to this is an introduction by the English printer and bibliographer William Blades (1824-90) discussing the authorship and printing of the work, which saw numerous editions between 1486 and 1810. The arms illustrating the treatise on heraldry are reproduced in black and white.

Only three perfect copies of the 1486 first edition of the Book of St Albans are known to exist. The original edition credits the book, or at least the part on hunting, to Juliana Berners, who is believed to have been the prioress of Sopwell Priory near Saint Albans, an attribution at the end of the work reading: "Explicit Dam Julyans Barnes in her boke of huntyng". The Book of St Albans is, however, not an original composition, but a compilation from earlier manuscripts. The hawking treatise is considered to be adapted from the "Booke of Hawkyng after Prince Edwarde Kyng of Englande", a manuscript of the reign of Edward IV of England (BL Harley Collection 2340). It is not intended as a full practical treatise on falconry, but introduces technical terms and describes feeding and illnesses. The essay on hunting, in particular, is attributed to Dame Juliana Berners. It is in fact a metrical form of much older matter, going back to a manuscript from the reign of King Edward II, and written in French: "Le Art de Venerie" by the huntsman Guillaume Twici.

Small portion of spine chipped. Occasional foxing to interior. Provenance: handwritten ownerships of the English cleric and author Morgan George Watkins (1835-1911, dated Barnoldby le Beck, 1881), of Humphrey B. Watkins (gift from Watkins, dated April 1906), and of Charles Henry Stanley Garton (b. 1920, dated Kingswood, Medmenham, Bucks., 12 Sept. 1942) to flyleaf. Loosely inserted: a clipping from the "Athenaeum" (11 Sept. 1880); a publisher's advertisement for a facsimile edition of the fishing treatise added to the Book in 1496; and a five-page typescript catalogue of a private collection of falconry literature. Two newspaper clippings on the Book of St Albans are mounted to pastedown.

A good copy of this celebrated facsimile edition of what is considered "the earliest English printed book" (Harting). 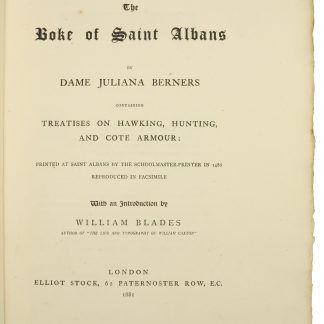