4to. 36 pp. With 5 black and white photographic plates in the text. Original printed wrappers.

Rare issue of the periodical of the British Falconers' Club, the first issue of which appeared in 1937, including tributes to the late Vice-Presidents George Edward Lodge (1860-1954) and Guy Aylmer (1887-1954), as well as several book reviews. The contributors make observations on the Ovampo sparrowhawk, the African goshawk, and the red-headed merlin, as well as on partridge hawking, hacking, and the Dutch Falconers' Hut in "De Hoge Veluwe" National Park. The editorial discusses the 1954 Protection of Birds Act, which established the necessity of a licence when taking, selling, or importing live birds of prey for the purposes of falconry, stating that "it is most satisfactory that falconry has been recognised in this way, which gives it, potentially, a very much more favourable status than it has enjoyed for many years" (p. 10). The illustrations show the two former vice-presidents, G. E. Lodge painting, G. Aylmer with his hawk, hawks and merlins, and the Dutch Falconers' Hut surrounded by several hooded birds on perches. 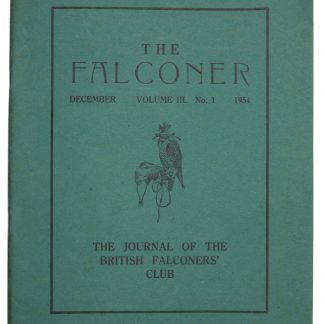