From Surveys made by the Officers of the Indian Navy

Exceedingly rare, large map of the Arabian Peninsula, based on surveys conducted under General F. R. Chesney (1789-1872), the explorer of the Euphrates and founder of the overland route to India. Drawn by W. H. F. Plate. This is a second, improved edition of a map that had previously appeared in 1847 under the simple title "Arabia" (kept at the British Library, referenced as IOR/X/3205 within the Qatar Digital Library). "Mesopotamia and its rivers are laid down from Surveys made during the Euphrates Expedition. The Red Sea, the Persian Gulf and the Southern Coast of Arabia are from those made by the Officers or the Indian Navy. The interior of the peninsula is from various sources, particularly materials furnished for the accompanying work by Aloys Sprenger M.D. and from documents obtained by Dr. Plate" (note). Finely preserved. No copy known outside the British Library. 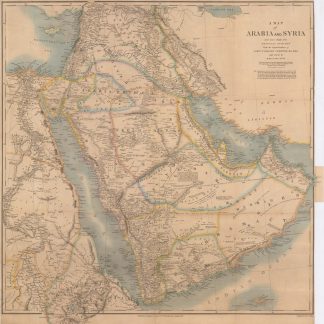