In German, to the Austrian politician and writer Heinrich York-Steiner, a pioneer of Zionism, in answer to a request for permission to reprint a statement on Palestine. Einstein expresses his deepest admiration for York-Steiner's book "Die Kunst als Jude zu leben" (1928), which he has read in its entirety, fully agreeing with its analysis and finding it gratifying that the book has attracted so much interest. Einstein writes that he has published various items about recent conflicts with the Arabs and is unaware to which one York-Steiner refers, but gives permission to reprint whatever he finds appropriate. Einstein writes that he became acquainted with the concept of Zionism only in 1914, at the age of 35, after moving to Berlin, having previously lived in a totally neutral environment. "But ever since then it has been clear to me that to maintain, or rather regain, an existence in decency, we Jews have an urgent need to revive a sense of community. I recognize Zionism as the only effort that brings us closer to this goal. However, it is now necessary to ensure that this movement avoids the danger of degenerating into blind nationalism. Foremost, I feel, one must seek to replace resentment towards the Arabs with psychological understanding and an honest desire for co-operation. In my opinion, overcoming this difficulty will be the final touchstone on which will depend our community's right to exist in a higher sense". Unfortunately, Einstein must acknowledge that the attitude in official circles and the majority of published statements leave much to be desired in this regard. 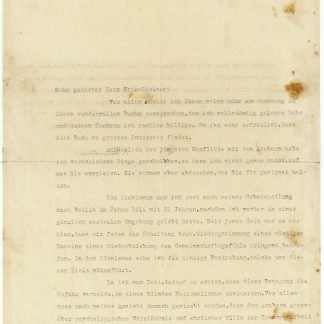