First edition of the first illustrated description of the plants of Sri Lanka, based on the famous botanical collections of Paul Hermann and Jan Hartog in The Netherlands. The plants were taken from Sri Lanka, however most of these did not exclusively exist there but grew throughout the entire South Indian Ocean region, making this book relevant for more than just the island of Ceylon. Described and illustrated plants include the Malabar nut, amaranth, cinnamon, different types of jasmin etc. Johannes Burmann (1707-79), Dutch physician and botanist at Amsterdam, was well acquainted with Carl Linnaeus. While Burmann was working on the Thesaurus Zeylanicus he was helped by Linnaeus, who was staying at Burmann's house at the time. In the same period the monumental works of Linnaeus were published that would change science. The plates are referred to as engravings, but they are most likely finely etched. Plate 18 is numbered double, causing much confusion about the number of plates with it often being described as having 110 instead of 111 plates. The dedication on *2 has 2 different states: this one opens with Nicolao Sautyn.

Some annotations in pencil. Hinges worn and some wear to the boards. Plates a bit browned as usual. In very good condition. 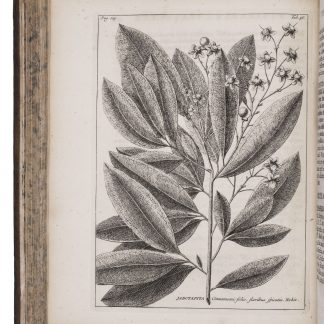