Monograph on the birds of prey of the entire Nile region

4to. 188 pp. Illustrated with 52 colour plates and 2 black and white plates depicting birds of prey, a plate with 4 photographs of nests, and 2 lithographed illustrations in the text of ancient Egyptian statues of falcons. Rebound in blue half morocco with title label.

The very rare only published volume of "Die Vögel am Nil" by Alexander Koenig (1858-1940): a monograph on the birds of prey of the entire Nile region, with many beautiful plates. Koenig traveled to the Nile six times to study the local fauna and concentrated his findings in this second volume, completed near the end of his life. Koenig was a scholar and a man of wealth as well an an avid collector. In 1912 he founded the renowned Museum Koenig in Bonn. In 1964 the 'first' volume was published posthumously in Bonn by the Alexander Koenig Stiftung under the title "Alexander Koenigs Reisen am Nil". Koenig had first published his studies on Egyptian birds of prey in the "Journal für Ornithologie" over the course of many years (1907-32) under the title "Avifauna Aegyptiaca", with some plates. All of these contributions were assembled and expanded, with new plates added, in "Die Vögel am Nil". (The plates already published in the journals are marked "Avif. Aeg."). The birds are divided into three types: vultures, falcons, and owls. The chromolithographed plates of vultures are done by F. Naubaur after E. de Maes (the eggs only by De Maes). Most falcon plates are signed "FR" (A. Frisch) in the plate and executed by Otto Kleinschmidt, printed at the Kunstanstalt Köhler at Gera (Germany), others are by F. Neubaur and E. de Maes. Another plate of eggs (XLIX) is by Paul Preiss. Most of the owls are done by F. Neubaur, with the exception of plate LIV, which is signed "JCK" (Keulmans). The ornithological artist Otto Kleinschmidt was also a collector of bird specimens. His collections of over 10,000 specimens was sold to the Museum Koenig in 1935. 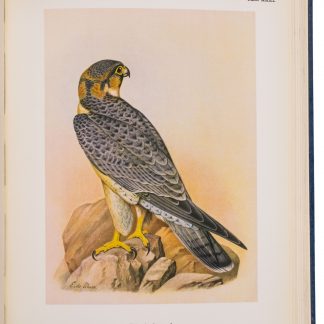