A 'Zealous Muslim' and a Hajji: Alexander the Great in the Islamic Tradition

Full manuscript, complete in 72 titled stanzas and 6,866 verse couplets, of this celebrated Islamic biography of Alexander the Great (356-323 BC). The colophon of the present manuscript states that it was composed in the Persian Year 570, i. e. 1202 AD, and we suspect that the present copy was executed in Northern India, probably Kashmir (where Alexander is said to have finally halted his campaign, dying soon after), in the late 18th or early 19th century. "The Alexander of the Persian romances is much more colorful than his Western counterpart [...] Nizami celebrates him first as a king and conqueror, then as a sage and a prophet. In 'Iskandarnamah', in addition to being a zealous Moslem, Alexander becomes an ardent lover with numerous wives and concubines" (Southgate, "Portraits of Alexander in Persian Alexander-Romances of the Islamic Era").

Contents in good order and sound, with a handful of ancient paper repairs to margins throughout. Early (Urdu?) ownership inscriptions on endpapers as well as 19th century English inscription of flyleaf. Bookplate of James Henry Stone (1829-1908) on pastedown.

Manuscripts of the "Eskander-nama" are of great rarity on the market: we are aware of no other examples currently offered for sale, and the last we can find in auction records sold at Sotheby's in 1970 (consisting of just 97 ff).

Cf. Sprengler, A Catalogue of the Arabic, Persian and Hindústány Manuscripts Vol. 1, no. 422; Southgate, "Portraits of Alexander in Persian Alexander-Romances of the Islamic Era" Journal of the American Oriental Society Vol. 97 (1977), pp. 278-284. 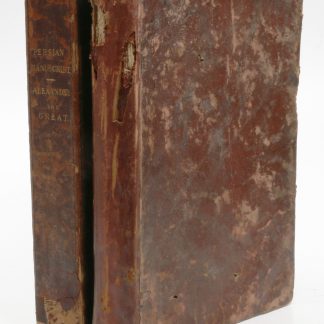