A wealth of statistics and confidential information on the railway's operations

Exceedingly rare and historically important: the official annual report of the Hejaz Railway for the Year 1911, with text entirely in Ottoman Turkish, featuring a wealth of statistics and confidential information on the railway's operations available nowhere else, including a stellar large-format example of the authoritative map of the railway, considered both in its time and by today's historians the seminal source on the railway's peacetime operations.

Easily one of the most substantial contemporary works on the Hejaz Railway, this report commissioned by the Directors of the Railway contains authoritative statistics and privileged information captured during the midpoint of its peacetime heyday. The map by Mukhtar Bey, Umar Zaki, and Hasan Mu'ayyin has the distinction of being the finest and most detailed published cartographic representation of the system.

The Hejaz Railway was a legendary project that aimed to complete a fixed link between Damascus and Mecca, the destination of the Hajj. Sultan Abdul Hamid II initiated the endeavour so as to solidify his claim to be the Caliph, the guardian of Islam, by assisting thousands of the faithful to make the pilgrimage safely, while providing the Ottoman Army with a rapid route to the Hejaz, a region that had long chafed under Turkish rule. The project was funded by subscriptions from Muslims worldwide, but was largely reliant upon German engineering and technology. Construction commenced in 1901, and by 1908 engineers completed the 1,320 km distance to Medina, the second most sacred city in Islam. It was then possible to travel from Damascus to Medina in only 55 hours. While Medina was still 400 km short of Mecca, the final leg could usually be travelled without too much trouble. For a variety of political reasons, the project was terminated in Medina: still, what was achieved should be viewed as great success, as during the next half-decade it allowed hundreds of thousands of pilgrims to make the Hajj with unprecedented speed, safely and comfort.

Condition: very good; title toned and mildly stained with contemporary Ottoman revenue stamp. Text overall bright and clean with some creasing; original staples rusted with final folding chart and map loose and some very minor loss in blank area around staple holes. Map in charming original colour but with light toning along old folds and some stains in lower right quadrant from the natural oxidization of the original glue used to affix it to the pamphlet.

Extremely rare; we can trace only two examples, both held by Turkish institutions. 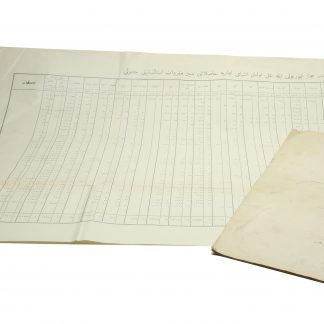