Folio (240 x 350 mm). Vol. 1 (of 3). (52), 590, 583-982 pp. Title-page and half-title printed in red and black; half-title with an engraved border showing great medical practitioners. Further with woodcut device on title, a nearly full-page woodcut diagram of the ocular anatomy, and 2 full-page woodcuts with a total of 6 illustrations showing the practice of osteopathy. Near-contemporary full calf with giltstamped label to gilt spine. Marbled endpapers. All edges sprinkled red.

Rare, early illustrated edition of "the most famous medical text ever written" (Garrison/M. 43). Giunta's was the first edition ever to contain illustrations (six meticulous woodcuts of a physician performing chiropractic treatments, as well as a diagram of the human eye anatomy). The present volume, the first and by far most copious of a set of three commonly bound in two volumes, comprises books 1 through 3 (out of 5).

Ibn Sina's "Keta-b al-qanun fi'l-tebb" ("Canon of Medicine"), written in Arabic but widely translated throughout the Middle Ages and the basis of medical training in the West as late as the mid-17th century. Finished in 1025, the Qanun is divided into 5 books, devoted to the basic principles of medicine, the Materia Medica (listing about 800 drugs), pathology, diseases affecting the body as a whole and finally the formulary.

Ibn Sina (c. 980-1037), in the West known by his Latinized name Avicenna, was physician to the ruling caliphs. The influence of his Qanun can hardly be overestimated. Translated into Latin in the 12th century, it became a standard textbook of Galenic medicine, influencing many generations of physicians. "From the early fourteenth to the mid-sixteenth century Avicenna held a high place in Western European medical studies, ranking together with Hippocrates and Galen as an acknowledged authority" (Weisser). "[T]he final codification of all Greco-Arabic medicine. It dominated the medical schools of Europe and Asia for five centuries" (Garrison/M. 43). 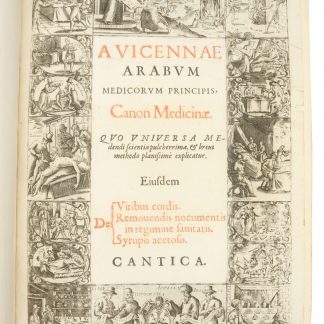