The beauty of Vienna

Two of Mollo's most beautiful and most popular series of Viennese views, lavishly hand-coloured within grey wash passe-partout borders in the manner of the de luxe issue, but on normal paper rather than trimmed and mounted on grey cardboard. As typical of the de luxe issue, both works (showing "Vienna's monuments" and "Vienna's environs") here comprise the first 64 numbered plates only of their respective series (instead of 78 in the first and 66 in the second series); however; the final, unnumbered 79th plate of the "monuments" set, showing a view of the city from the "Spinnerin am Kreuz" south of Vienna, is included as a frontispiece.

Exceedingly rare in all states: a single copy of the de luxe issue is recorded at auction since 1975 (the Rudolf von Gutmann copy, sold at Sotheby's in 1993 and again at Christie's in 2006), and only one other copy of both works is listed. 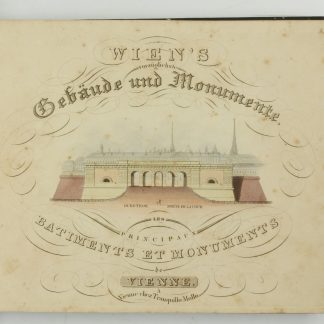