The Manifesto of the Communist Party: First Yiddish Edition in Book Form

The first independently published Yiddish translation of the Communist Manifesto, printed by the Bund on behalf of the Russian Social-Democratic Labor Party, with a specially written preface by Karl Kautsky. While Feltrinelli, who had seen two specimens, maintained that the book was "paru sans couverture", the present example has the original wrapper cover pasted onto the upper board. This is the first appearance in Yiddish of the Communist Manifesto in book form: previously, in April-May 1890, a free adaptation of sections I and II had appeared over three issues of "Der Arbeiter Freint" (London), while in May-August 1897 Abraham Kahan published a Yiddish translation over a series of issues in "Die Zukunft" (New York). The present translation, by J. Blumenshtein, is extremely rare: only five copies with this collation could be ascertained in libraries (2 in YIVO; Harvard; Florida Atlantic Univ.; and the Univ. of Wisconsin, Madison; the latter copy missing last three pages and back cover). The Brandeis Library cites an 1899 edition with 122 pp. (unknown to Feltrinelli); the copy at the International Institute of Social History, Amsterdam, comprises 97 pp., while that in the Friedrich-Ebert-Stiftung is supposedly published in New York and comprises 93 leaves, apparently a photocopy. Feltrinelli cites additional photocopies in the UB Amsterdam (Rosenthaliana), Chimen Abramsky Coll., London, Feltrinelli Coll., Genève, and Istituto Feltrinelli, Milan. 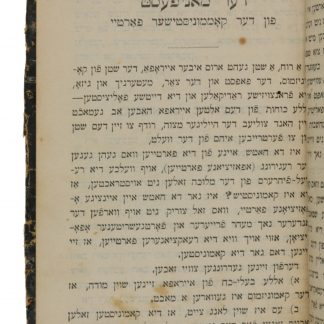