Rare first and only edition of this treatise on historical Palestine and the Jewish people by the eminent Spanish theologian Benito Arias Montano (1527-98), an intimate friend of Plantin's. Under the patronage of Philip II of Spain, Arias supervised the edition of the eight-volume Antwerp Polyglot Bible (1569-72), from which massive effort grew the present, more specialized work (cf. Voet I, 584 for the plate of the Temple at Jerusalem). The remarkable map of the world (Shirley 125: 2nd state of 3), showing the Jewish tribes dispersed over both hemispheres, is taken directly from the Antwerp Polyglot. Interestingly enough, "there is an unusual island shown in the position of Australia which has given rise to speculation" (Shirley).

Other engravings include a map showing the Middle East as far as Kuwait on the Gulf coast, a representation of Noah’s Ark, and several images of the Temple, depicting it as a symmetrically constructed City of God - the same ideal that informed the Escorial of King Philip. The book's nine parts treat the Holy Land and its geography, the Twelve Tribes of Israel, Jerusalem, the Temple, and the ritual institutions of ancient Judaism; the final chapter discusses the computation of time since the Creation.

The maps are identified with letters from A to P (some printed in red letterpress, others hand-lettered in ink). The first four plates are loose; the remaining plates are erroneously bound before their letter's respective quire signatures rather than in the place indicated by the text; the final plate Q (showing a Hebrew priest) is missing.

An old ink note (apparently a shelfmark) to the front pastedown. Occasional light browning; some tears to plates professionally repaired. Still a good copy of this rare work. 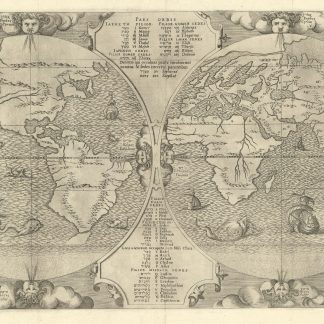