The first illustrated edition of the greatest work of Islamic medicine

Very rare and early Venetian edition of what is perhaps the most important medical text of the Middle Ages. This is the true first edition ever to contain illustrations: six meticulous woodcuts of a physician performing chiropractic treatments, usually first credited to Giunta's 1555 edition, in which they were moved from the appendix to the text. Based on the translation of Gerard of Cremona, edited and revised by Andrea Alpago of Belluno, who also included an extensive glossary of Arabic terms (no edition in the original Arabic was printed until 1593). In the illustrated title page, portraits appear of the great classical and medieval Islamic figures of medicine and philosophy: Asclepius, Hippocrates, Galen, Avicenna, Rasis, Plato, Aristotle, Theophrastus and Averroes.

Ibn Sina's "Keta-b al-qanun fi'l-tebb" ("Canon of Medicine"), hailed as "the most famous medical text ever written" (Garrison/M. 43), was written in Arabic but widely translated throughout the Middle Ages and formed the basis of medical training in the West as late as the mid-17th century. Completed in 1025, the Qanun is divided into 5 books, devoted to the basic principles of medicine, the Materia Medica (listing about 800 drugs), pathology, diseases affecting the body as a whole and finally the formulary.

Ibn Sina (c. 980-1037), known in the Western tradition as Avicenna, was physician to the ruling caliphs. The influence of his Qanun can hardly be overestimated. Translated into Latin in the 12th century, it became a standard textbook of Galenic medicine, influencing many generations of physicians.

Occasional insignificant browning and staining to margins. Spine reinforced with vellum, possibly in the 18th century. Reverse of rear flyleaf covered with notes in a very coarse 18th century Italian hand. A well-preserved copy of a very rare edition: unlike Giunta's more common succeeding issues of 1555 and 1556, the present edition is known to have appeared on the market only once (Swann, 1979: a severely incomplete copy, comprising the first 312 leaves only). 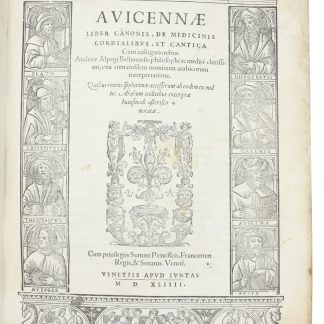