The first (and only early) edition of this detailed study of Arabic inscriptions found in Granada, with the texts of the inscriptions set in naskh Arabic type and also translated into Spanish. It includes many poems, notably those of Ibn Zamrak (1333-93), as well as Lafuente's overview of the history and genealogy of the Moorish Nasrid dynasty (1230-1492) that ruled the Emirate of Granada, the last Islamic realm in Spain. Emilio Lafuente y Alcantara (1825-68), a disciple of Don Pascual de Gayangos and José Moreno Nieto, includes much information from documents he had newly discovered himself. He was "gifted with great erudition and love of scholarship" and condemned mediaeval Christian intolerance of Islam, the destruction of Arabic manuscripts during the Inquisition and the damage done to the Alhambra by rebuilding under Charles V. In his present first major publication, Lafuente attempts to document surviving Arabic inscriptions in Spain before anyone could destroy or incompetently restore them. This quickly established him as one of the leading oriental scholars of the Iberian peninsula, but his work was cut short by his premature death nine years later. The book, reissued in 1860 with no change except for the date on the new wrappers, inspired a new interest in Iberian Arabic poetry, but was largely forgotten by bibliographers of Arabic studies. It was reprinted without revisions in 2000 and remains an important source for Islamic Granada.

Vellum covers slightly warped. Paper evenly browned throughout; slightly foxed in places. Near-contemporary handwritten English annotations in ink and pencil to p. 169, correcting Lafuente's claim that a large vase had disappeared from the Alhambra and probably is to be found "ornamenting the cabinet of some Englishman, passionate for our things": "This is a mistake entirely. The great 2nd jar is in the Museum at Madrid [...]". 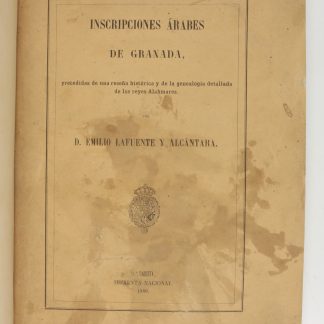