Maxwell, William John Leigh. Letters of an Engineer While on Service in Syria. In Connection with the Proposed Euphrates Valley Railway and the Beyrout Waterworks.

Rare first and only edition: a collection of vivid letters by the Belfast-born engineer Maxwell (1838-80), written from Syria in 1870-73 to friends while he was performing surveys for a railroad through the valley of the Euphrates and planning the water supply of Beirut in Lebanon.

Maxwell travels via Brindisi and the Greek islands through Smyrna, Rhodes, Antioch, and Beilan, where he describes the difficulty of designing a railroad due to the lack of proper mapping of the area: "On many occasions I was tripped up, and sent rolling down amongst other unfriendly plants" (p. 50). He also gives an account of his visit to "the finest house of Aleppo" (p. 101) and a flood in Smyrna, describes the cities of Tripolis, Beirut, Jerusalem, and Port Said, and expresses his disappointment over the Sublime Porte interrupting his survey, which indeed was never carried out completely, on several occasions.

The second and third period of letters were prompted by Maxwell's engagement in providing the city of Beirut with a water supply. They give an account of Cairo and the pyramids as well as of Alexandria before going on to describe negotiations with the council in Beirut and the obstacles met there: "As a last hope, we determined, and I think wisely, to try and obtain by means of the Consuls and public opinion what cannot be obtained by polite asking" (p. 273). The letters from the second period include a trip to Cyprus as well as descriptions of Damascus and the ancient waterworks, while those from the third period show the works on the Nahr-al-Kalb in full swing and describe an inspection of the site by Rustem Pasha, Governor-General of the Lebanon.

The frontispiece shows a portrait of Maxwell with his reproduced signature. Binding discreetly rebacked, modern cloth hinges. Light foxing near the beginning; otherwise in excellent condition. Rare: OCLC lists only five copies internationally (2 in the US, 3 in the UK). 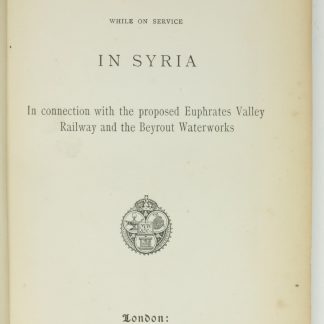 You're viewing: Maxwell, William John Leigh. Letters of an Engineer While on Service in Syria. In Connection with the …London, 1886. € 950.00
Add to cart