Second edition of Manuel Godinho's account of his return trip from India to Portugal in 1664 by a new route, particularly important for its observations on India and the Middle East. "A very rare and valuable book of early travel in and near India, of which Brunet remarks that it is so rare as to have been wanting in the best collections of Voyages and Travels sold during many years past" (Quaritch, Bibliotheca Hispana, 210). First published in 1665, this classic of Portuguese travel literature contains valuable descriptions of India, Persia, and the adjacent Turkish Dominions, Arabia Felix, Arabia Deserta, etc. Godinho (1632-1712) had the spirit of an adventurer rather than a priest, and left the Order on his return to Portugal in 1663. He candidly admits the decline of Portuguese power in India, and the rise of the English and Dutch, especially the former. "His entertaining account of his rush to Europe contains observations of the customs of the Hindus and Muslims, as well as descriptions of the places visited" (Howgego). One of the earliest and most interesting Jesuit accounts of India, dating from the very end of Portuguese domination of the country, written shortly before Bombay was ceded once and for all to the English in accordance with the Anglo-Portuguese peace treaty of 1661. 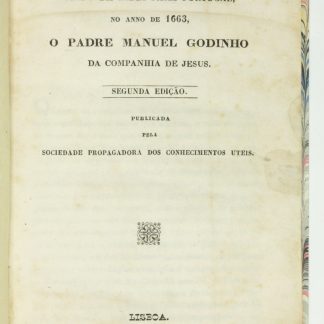