A large, handsome map of Eastern Mediterranean, the Middle East and part of Central Asia, notable for its accurate depiction of the Arabian Peninsula - a vast improvement over Wyld's 1824 map of the region. Insets show the Bosporus and the Dardanelles. Along the coast of the modern UAE, the map identifies (among numerous other localities) "Abothubbee", "Ras Hassan", "Ahoo Heyle", "Debai", "Sharja", "Aymaun", etc. This is one of the first British commercial (not official/governmental) maps to show Qatar in any detail and was no doubt informed by the first British survey of the Gulf, undertaken by George Barnes Brucks in the 1820s. 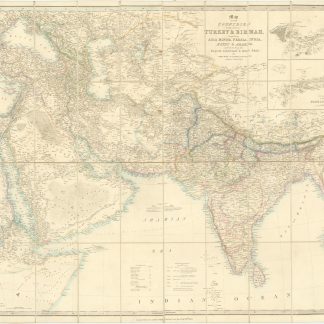