The League commissions Marx to write the Communist Manifesto

Mocznay, Hans, German painter and sculptor (1906-1996). A painting of Karl Marx speaking at the Second Congress of the Communist League.

A painting of Karl Marx speaking at the Second Congress of the Communist League in 1847, where he and Engels were commissioned to compose the Communist Manifesto.

The painting was formerly on display at the Ministry of Culture in East Berlin. Hans Mocznay, a student of the Bauhaus artist Johannes Itten, was the main artist commissioned by the SED for such historical paintings of Marxist themes. Many of his works, including a preparatory study for this one, are kept at the Museum of German History (Deutsches Historisches Museum) in Berlin. 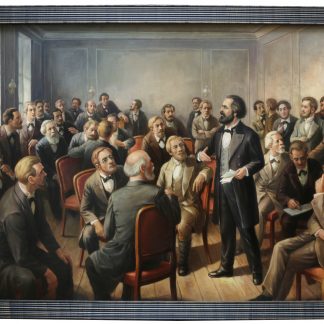