Bombay, (Hosang T. Anklesaria at the Fort Printing Press, for the translator), 1934.

The Gathas are the only part of the Avesta believed to have been written by the prophet Zarathustra. As a result, they have exercised a fascination over orientalists and followers of the Zoroastrian faith, many of whom have been inspired to produce translations. Prepared in Kanga's 80 year, his version was made in memory of his father. Though based on a number of earlier translations, it relies most heavily on a Gujarati version by Ervad Kavasjee Eduljee Kanga.

With an extensive foreword by D. J. Irani giving "An introduction to the study of the Gathas". Corners bumped and boards slightly dust-soiled, traces of vertical bending, otherwise very good. 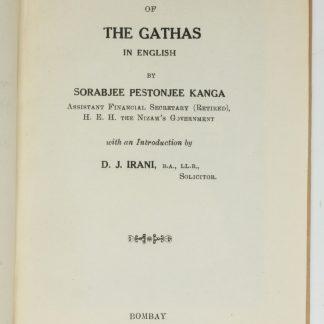