Japanese plants depicted for the first time in the West

First and only edition of one of the rarest books on Japanese flora. Kaempfer (1651-1716) was a professor from Lemgo, Germany, who joined the Dutch East India Company (VOC) as a physician in 1685. After periods in what are now India and Indonesia he travelled in 1690 to Japan to work as a doctor on Dejima (Deshima), the Dutch trading post or factory in Nagasaki. This was one of the rare places where Western and Japanese people were allowed to interact. During his three-year term of duty, Kaempfer was twice allowed to journey to Edo (now Tokyo) in the company of the head of the factory. Upon his return he went into medical practice in his native town, Lemgo. After his return to Europe he wrote a number of works in manuscript, but did publish them, leaving them in manuscript at his death. Sir Hans Sloane acquired these manuscripts, alsong with his drawings and herbarium, and arranged for their translation and publication, the first to appear in translation was The history of Japan in 1727. This English translation established Kaempfer's reputation as the 18th-century authority on Japan and deeply influenced Japan's image in Europe.

Kaempfer's botanical drawings used for the present publication were among the more than 4000 groups of manuscripts from Sloane's collection that formed the core of the Library of the British Museum when it was established in 1753 (Sloane MS 2914). The renowned botanist and companion of the 1768 Cook expedition Sir Joseph Banks (1743-1820) was responsible for the editing and publication of this work and dedicated it to the curators of the Library. In most cases no plates had previously been made from these drawings, so they remained unpublished. In the last years of his life Kaempfer himself had published only a small number of his drawings in his Amoenitatum exoticarum, printed in Lemgo in 1712. Thus the present publication introduces many Japanese plants for the first time to a large audience in the West. Kaempfer's herbrarium is now in the Natural History Museum, South Kensington.

Royal Library duplicate stamp in the foot of title page. With some minor foxing, the last few plates stained only in the lower margin, not affecting the illustrations. Otherwise in very good condition. 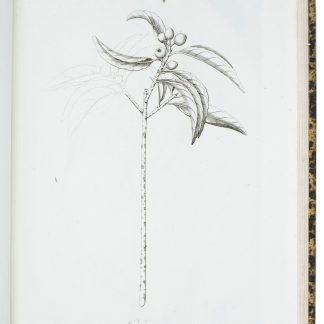