"An Innocent Arab Proposing the Destiny of the Universe": An Unpublished French Manuscript with 10 Volvelles

Sole recorded witness of a vernacular translation of this forbidden, volvelle-laden manual of prognostication, burned upon publication at the orders of the Bishop of Nantes. Appearing in 1654 as the "Astrologiae Nova Methodus", the work was immediately condemned (cf. Caillet and Dorbon) and is excessively rare in census today; no vernacular translation is known to have been published.

The treatise was deemed offensive due to the predictions of 5 volvelles in the second section, which offer horoscopes for Islam, Christianity, France, Spain, and England. The "Figure de la Secte Mahometane" found here on pp. 127-131 dare to give a horoscope of the Prophet Mohammed and a list of significant events in the history of Islam - including the suggestion that a quarter of the world will be Islamic by 1703 (mistranscribed here as 1603); the horoscope of Christianity also includes dire predictions up to 1800. The predictions for the fate of England which had caused a serious diplomatic dispute - resulting in the English ambassador demanding the book be suppressed - are curiously avoided here, and the commentary instead ends during the reign of Queen Elizabeth. In the more common censured editions of the "Astrologiae Nova Methodus", neither these 5 volvelles nor any part of their textual elaborations are included.

The present manuscript certainly advertises itself as a ready for printing, beginning with a preface from the "printer to the reader", in which the author states that he encountered the 1654 Rennes edition by chance and was encouraged to produce his own "ouvrage" of it despite being aware of its censure, "quoique tous les curieux le demandassent avec empressement, nous avons differé de le donner au public, jusqu'a ce qu'il eur essayé la censure des connoisseurs". He explains the scandals attributed to the original as due to minor faults in the original "principles"; "what's more, the particular figures of France, Spain, and England were in any case erroneous thanks to the engraver, whom as we have learned was always drunk". This 18th-century editor explains that he has now corrected certain egregious faults and has simplified a few volvelles.

According to the "Vie de l'Auteur" (pp. 3-6), he is a patriotic native of Arabia Felix; as he explains, among the blessings accorded to this happy nation are fertile soils, medicinal plants, and a large number of illustrious men well-versed in astrology. The original title-page of the Rennes edition attributes the work to a certain Francisco Allaeio, "Christian Arab", but this is probably a pseudonym for Yves de Paris, a Capuchin monk known for his anti-establishment views. The final unpaginated section of the work, following the index, offers a 31-page religious justification for the relevance of astrological prediction, in which the author defends himself as "an innocent Arab proposing the destiny of the universe".

Provenance: likely the great 18th century bibliophile the Duc de La Vallière (1708-80; his sale, 1783, lot 1822). The Abbé Duclos' "Dictionnaire bibliographique, historique et critique des livres rares" (1791) notes a manuscript under exactly the same title as the present work (vol. I, p. 25) and adds the description "in-4. Manuscrit sur papier du XVIIIe Siècle, vendu 12 liv. chez M. de Duc de la Vallière, en 1784". Examining the sale catalogue of the Duc de la Vallière (1783), we find a further description of his manuscript as "très proprement écrit, contenant 359 feuillets". Among the contents of that manuscript was a "Pratique abrégée des jugemens astrologiques sur les Nativités & autres traités astrologiques" not found here, and perhaps formerly occupying the rest of the volume; it is evident that the present manuscript was rebound sometime in the 20th century. Unidentified engraved bookplate on pastedown as well as that of the collector Gonzague de Marliave.

Peignot II, 204f. Thorndike VIII, pp. 310-312. Dorbon-Ainé 61f. Houzeau/L. 5217 ("excessively rare… this work was burned due to the predictions it contains. The first edition is the only complete one, the two further editions were expurgated"). Caillet III, 11557 ("the first edition, extremely rare, was burnt in Nantes or Rennes by the censorship officials"). 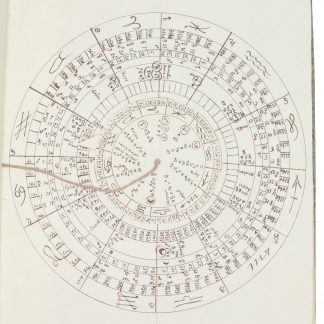