Rare CIA-produced atlas of the People's Republic a decade after the "loss of China", at the onset of the country's "Great Leap Forward". It was designed to provide U.S. analysts with "fuller information on Communist adminstrative units" and to aid their interpretation of data emanating from the PRC, of "its statistical reporting, and the complexity of the administrative structure". The names of counties, districts, and municipalities are listed in the margin of each provincial map in Chinese and English. As the editors write in their introduction, the "catastrophic overhaul now in progress requires that the atlas be provisional in content and economical in format". Curiously, the 25 provincial maps are larger-scale reproductions from a 1956 Communist Chinese school atlas, the pocket-size "Chung-kuo fen-sheng ti-t’u" ("Provincial Atlas of a China"), with additional Agency annotations, while the "maps give place names, hsien (county) seats, and some hydrography and roads. The accompanying marginal lists [...] are based on the '1957 Handbook of Administrative Subdivisions of the PRC' (Chung-hua jenmin kung-ho-kuo hsing-cheng ch’ü-hua chien-ts’e) which lists and indexes all administrative units at the hsien level and above as of 1 January 1957." - Maps, captions, and index are carefully coordinated by the editors, including tables of comparative keys to the Wade-Giles, Yale, and the then-new Pinyin romanization system as well as of the standard abbreviations of Chinese characters. A prefixed letter-sized typescript advises readers that the atlas is not intended foremost to convey topographical information, but rather "to aid research workers faced with problems of interpreting current information on Communist China in the light of its complex administrational structure", and requests recipients who find it "does not serve their needs" to return it ("because of the expense involved in the production of the atlas and the limited size of the edition") to the CIA's Record Center at the old CIA Headquarters in the E Street complex of Washington, DC.

A very light waterstain to the upper edge throughout; insignificant wrinkling, more pronounced in upper cover, which also shows light scuff marks and tiny loss to the lower right corner. A fine survival documenting the fraught U.S.-Chinese relations of another age. 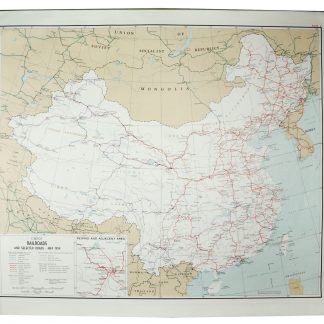