A fine herbal from the French Royal collections, dissolved during the Revolution, mostly containing specimens from the American continent. The watermarked paper, the editor's handwriting, and the style of the royal binding and fleurs-de-lys suggest a date of production around the end of the reign of Louis XV or near the beginning of that of his successor, Louis XVI. The "Recueil des semples" (as the spine title reads) was probably compiled by a royal botanist from examples in the Jardin des Apothicaires or the Jardin des Plantes, or even in the course of a trans-Atlantic expedition, as most species appear to originate from the New World. The names and descriptions of the plants are written in Latin, often with abbreviated bibliographical references. Some of these indicate manuscript works by French botanists (such as Feuillée and Plumier) preserved in the royal collections, to which the compiler of this herbarium must have had access. Among the 120-odd specimens preserved here we find such species as Bignonia americana; Verbena mexicana; Dracocephalum americanum (Virginian Dragon's Head); Bellarnosia canadensis; Aristolochia americana (Pipevine); Jalapa mexicana; Solanum americanum (American black nightshade): Fragaria chiliensis (Chilean or beach strawberry); Ricinoides americana (purging nut); Manihot americana (cassava); etc. The collection also includes occasional specimens native to the Near East, such as Phlomis orientalis (Jerusalem sage).

Some offsetting to blank opposite pages, as common; a very few specimens missing, but in all a very appealingly preserved ensemble. Herbals of this period with royal provenance are very rare in private hands. 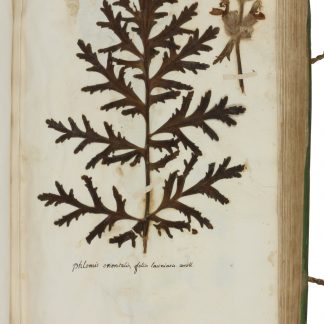