"possibly the most remarkable of all printed editions of Euclid ... in a class by itself"

First Arabic edition of Euclid's famous "Elements of Geometry", the "oldest mathematical textbook in the world still in common use today" (PMM). The translation is by the great Persian polymath Nasir al-Din al-Tusi (1201-74), after whom the lunar crater "Nasireddin" is named. Euclid's bibliographer Charles Thomas-Stanford calls this "possibly the most remarkable of all printed editions of Euclid", indeed an edition that might belong "in a class by itself". The Arabic version of Euclid's thirteen books was "made by the astronomer Nasir al-din in AD 1260 [...]. Printed throughout in Arabic, it is a distinguished product of the Roman press, and a typographical monument of which any press might be proud" (Thomas-Stanford, p. 17). While the work was issued simultaneously with a title-page also in Latin (reading "Euclidis Elementorum geometricorum libri tredecim, ex traditione doctissimi Nasiridini Tusini nunc primum Arabicè impressi"), this issue contains the title-page in Arabic only. There are also copies that contain merely twelve books and have 400 pages (instead of 453, as here).

The Sultan's privilege is signed by Badshah Islam al-Sultan, the son of al-Sultan al-Sultan Murad Khan, and dated Dhul-hijja 996 H in Constantinople. Paginated in Arabic throughout, with additional Western-style pagination from p. 25 onwards. One of the most important works to leave the Medicean Oriental Press, founded in 1584 by Cardinal Ferdinando I de’ Medici and directed by Giambattista Raimondi (1536-1614), an able scholar of Arabic.

Binding professionally repaired. Interior variously browned due to paper, but a good, complete copy of this rare and important edition. 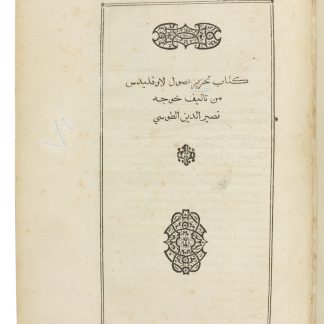