Rare account, by the French physician Paul Aubry, of Turkish military and civil hospitals, describing in detail their design and medical capacities, including accurate numbers of beds. An exceptional documentation of health care infrastructure in the Ottoman Empire, mentioning the Yildiz Ambulance, the Haider Pacha military hospital and the Haseki Hospital in Istanbul. The present offprint also contains a medical bibliography of works in German, Danish and Swedish published in 1886-87 as well as several abstracts, including an article on gonorrhoea by the Ottowa physician Coyteux Prévost, published in the "Union Médicale du Canada" in the same year.

Inscribed and signed by Aubry to Sultan Abdul Hamid II (1842-1918) on the front flyleaf. Binding slightly rubbed. Small marginal tears to pp. 39-42; last few pages somewhat creased. Library stamps erased from flyleaf and first page. From the library of Sultan Abdul Hamid II, the last Sultan of the Ottoman Empire to exert effective contol over the fracturing state and also remembered as a poet, translator and one of the dynasty's greatest bibliophiles. While his passion for books is memorialized by the many precious donations he gave to libraries all over the world and which mostly have remained intact to this day (including the 400-volume "Abdul-Hamid II Collection of Books and Serials" gifted to the Library of Congress), his own library was dispersed in the years following his deposition in 1909: books were removed to other palaces and even sold to Western collectors, the greatest part of his collection is today preserved in the Chester Beatty Library in Dublin. 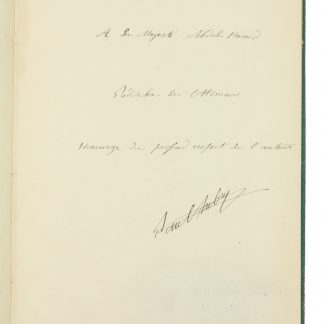