First and sole edition of this historical study of the "March of the Ten Thousand", the retreat of Greek mercenaries immortalized in Xenophon's "Anabasis". The author retraces the soldiers' marching route, drawing on his own experience after having spent several years in Armenia. The map shows a portion of Higher Armenia with the author's own route, as well as that given by Xenophon. Strecker, a former Prussian artillery lieutenant, entered Ottoman service in 1854 and was appointed governor of Bulgaria's Vidin region from 1864 to 1865, when he was known as "Reshid Pascha". In later sources he also appears as a leader of the Ottoman militia, going by the name of "Strecker Pascha".

Spine slightly rubbed, title-page slightly foxed, with traces of a paper label to verso. Inscribed to Sultan Abdul Hamid II and signed in Ottoman Turkish by Strecker (as "Reshid Pasha") on verso of flyleaf, opposite the title.

From the library of Sultan Abdul Hamid II (1842-1918), the last Sultan of the Ottoman Empire to exert effective contol over the fracturing state and also remembered as a poet, translator and one of the dynasty's greatest bibliophiles. While his passion for books is memorialized by the many precious donations he gave to libraries all over the world and which mostly have remained intact to this day (including the 400-volume "Abdul-Hamid II Collection of Books and Serials" gifted to the Library of Congress), his own library was dispersed in the years following his deposition in 1909: books were removed to other palaces and even sold to Western collectors, the greatest part of his collection is today preserved in the Chester Beatty Library in Dublin. 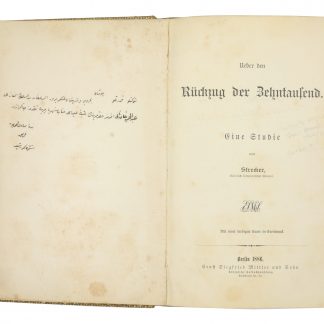