A list of Ottoman civil servants and high functionaries throughout the various municipalities and provinces of the former Ottoman Empire (including the Arabian Peninsula), most of them serving as either Islamic or ordinary judges and ranking as Sheikhs, as well as notables. This is probably the Konya copy of the official document listing the Imperial magistrates appointed for the year 1306 H under the direction of the Sheyhü'l-islam Uryani-zade Ahmet Esad Efendi in the last year of his life.

Separate chapters list the Ottoman judges in Mecca ("Mekke-i Mükerreme", "the Noblest") and Medina ("Medine-i Münevvere", "the Most-Enlightened"), as well as in the Ottoman Levant ("esh-Shamü'sh-Sharif": Syria, Lebanon, Jordan, and the territories now split between Israel and the Palestinian Authority) and those appointed for "Egypt - Cairo" (Misir Kahire), for Beirut, Baghdad, Athens, and numerous important cities in modern Turkey.

The calligraphy is mostly a well-legible variety of the classical Ottoman "chancery divani" which was used extensively in official documents as well as in private letters and which flourished in the 19th century, until the dusk of the Ottoman Empire. Dated "al-jum'a, 16 Jumada al-Awwal, sanat 1306" (during the night of Friday, the 16th day of the month Jumada, the First of the year 1306 = 18 January 1889 CE).

In the line just below the title, the renowned Ottoman religious scholar Uryani-zade Ahmet Esad Efendi (1813-89) is mentioned (along with the honorific titles of "Devletlu", for a "First class Pasha", and "Semahatlu", "Beneficent"). Uryani-zade served as Qadi, or Islamic judge, in several locations throughout the Empire before being appointed "Sheyhü'l-Islam", the highest rank in Islamic studies. He also was one of the most influential members of the Meclis-i Ayan ("Assembly of the Distinguished"), an Ottoman Senate created during the State reform period dubbed the Tanzimat period under the reign of Sultan Abdülhamid II. 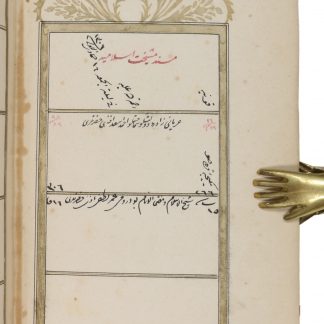