First edition of this classic of archaeology, documenting expeditions to Northern Arabia undertaken by the French orientalists Jaussen (1871-1962) and Savignac (1874-1951) prior to World War I. "Still indispensable" (Bowersock), the work is particularly remarkable for its epigraphical observations. Many ancient Arabic inscriptions were reproduced, translated and analysed here for the first time.

The set was published by the Societé des Fouilles Archéologiques between 1909 and 1922 in three parts. Parts I and II (the latter comprising a text volume, an atlas and a supplemental volume) describe the expedition from Jerusalem to Mada'in-Salih in the Hejaz in the spring of 1907, as well as the exploration of the ancient cities of Dadan, Teima and Harrah de Tebouk in 1909 and 1910. The plentiful illustrations include plans of the itinerary as well as photographs of archaeological sites and inscriptions, including impressive depictions of the monumental rock-cut tombs at Mada'in Salih, just north of the oasis Al-'Ula. The archaeologists also mapped the Arabic old town of Al-'Ula on the site of the biblical Dedan in order to localize a wealth of ancient Dadanitic inscriptions that were used as spolia in the Arabic houses. Jaussen and Savignac thus achieved the first systematic archaeological documentation of Mada'in Salih and Al-'Ula. Part III is dedicated entirely to the famous Umayyad desert castles Quseir Amra, Qasr Al-Kharanah, and Qasr Tuba in present-day eastern Jordan.

Volume I with a hole in the right margin throughout the second half, the hole fading to a tear throughout the first half, resulting in flaws to the covers, repaired with brown tape. Volume II has small flaws to extremities of boards; small tear in spine label. Atlas volume lacks plate 132, but includes duplicate plates of nos. 17, 131 and 137, further showing three small piercings to the lower board. An advertisement for the "Oeuvre catholique international pour la protection de la jeune fille", an organisation founded in Fribourg in 1897, is loosely inserted in vol. I. Rarely seen at auction. 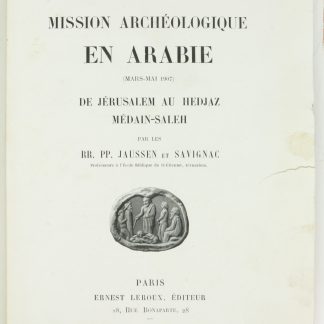