The first three decades of the UAE in photographs

229 original photographs, 1 portrait reproduced from a painting, and 2 portraits printed on thin cardboard (one round-shaped). Various sizes (ca. 74 x 110 to 201 x 282 mm), printed both in colour and black-and-white. Some photographs with handwritten Arabic captions in pen on verso; a few with pasted mimeograph typescript captions in English. Stored in 5 display books.

A large private photo archive, apparently assembled by a professional Middle Eastern journalist or press photographer, illustrating the reign of HRH Sheikh Zayed bin Sultan Al Nahyan (1918-2004), Father of the Nation and the ruler of Abu Dhabi for more than 30 years. Some pictures show HRH Sheikh Zayed welcoming foreign dignitaries such as the Syrian president Hafez Al Assad, Egyptian president Hosni Mubarak and French president Valery Giscard d'Estaing; others display industrial and cultural aspects of the Emirates, ranging from oil production in the desert to camel races and falconry. Another part of the set shows off prominent landmarks, including the Al Badiyah mosque, the oldest mosque of the Emirates, the forts of Al Hayl, Al Bithnah, and Al Jahili, the Blue Souq market hall in Sharjah, as well as Earth Park and the Zayed Sports City Stadium in Abu Dhabi. In addition, several images record National Day celebrations at the foot of Volcano Fountain in Abu Dhabi, demolished in 2004, but also show the Dubai skyline, military parades, and sailing vessels. A picture of an Iranian Phantom fighter-bomber flying over the Tunb islands shortly before Iranian forces occupied them in 1971 is a rare asset to this archive.

Mostly stamped and/or annotated in Arabic (and some in English) on versos for possibly use by the press, but not traced in the UAEhistory, Keystone or Hulton/Getty press photo archives. A few images have marginal tears or creases; one with a portion whited out for reproduction. Impressive in its extent and its wide variety of motifs, this uncommon set of not widely circulated photographs documents Abu Dhabi's transformation into a modern metropolis since the early 1970s. 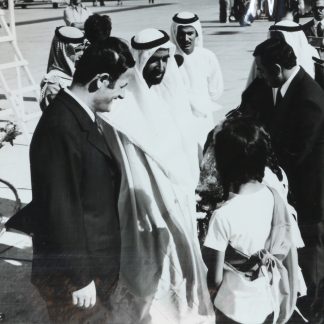