The first official Spanish imprint on bread: the only known copy, with an extensive 16th century handwritten note related to bread

4to. (8) pp., with full-page title woodcut, a woodcut initial, and a 16 century manuscript devoted to the trade in bread on the blank final page. Marbled wrappers.

Extremely rare Spanish royal mandate establishing maximum prices for bread, bales of wheat, and bran in the Kingdoms of Castile, Leon and Toledo. Fines would be levied on those who did not comply with the established prices. This was a "pregón", a text that was publicly read aloud "in town squares and markets and other places [...] by a crier, and before a public scribe or notary" (p. A3v). Bread was a staple food, especially for the impoverished classes, and the mandate was issued in response to unrest that arose when the price of bread became the object of speculation on the part of merchants and intermediaries who artificially raised prices, provoking a rise in the cost of wheat, flour, and other ingredients used in its manufacture.

Light staining; a few old ink underlinings. Almost unobtainably rare: while OCLC records five copies of the folio edition, the present copy of the quarto issue is the only specimen known; even Alexander S. Wilkinson states that he was unable to ascertain a single exemplar in public or private collections (cf. below). The present unique copy is of further interest for the nearly full-page contemporary Spanish note about the bread trade on the blank verso of the final leaf. 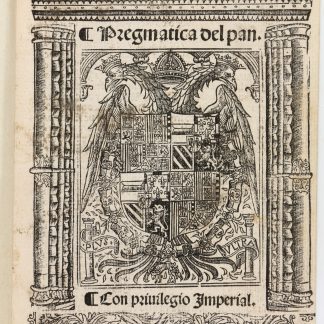