Exceedingly rare and apparently unrecorded: the official book of operating regulations for the Hejaz Railway, printed during the early days of World War I before the line was attacked by Lawrence of Arabia during the Arab Revolt beginning in June 1916.

The booklet features a wealth of information on the technical aspects of the railway, including qualitative and quantitative data on the rolling stock, fixed infrastructure (stations, tracks, bridges, etc.), workforce, scheduling, and safety and security procedures, including many details that appear in print nowhere else. It provides a valuable insight into how the railway functioned on a day-to-day basis during the twilight period of its operations.

We have not been able to trace a reference to the present edition of the work, let alone the location of another example. Indeed, only a very small print run would have been produced for official use, and the survival rates for such pamphlets issued for field use is notoriously low. Moreover, very few works on the Hejaz Railway were issued during World War I, as such publications tended to be censored by the Ottoman Government, lest useful military information fall into enemy hands. The present work contains much sensitive information; however, it was printed early in the conflict before the railway was threatened by enemy action. The present work is surely one of the last official technical publications on the Hejaz Railway to be published. 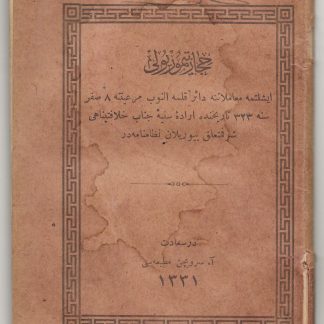