A German-language hectographed map showing the railways in Ottoman Asia, depicting the completed, in-construction, and projected routes of the Baghdad Railway and the Hejaz Railway. Also shows the proposed route of the Eastern Anatolian Railways, an abortive American scheme that is seldom shown on maps - a fascinating geo-strategic overview of the Middle East in the run-up to the First World War.

Since the late 19th century Germany was the primary investor and building contractor of railways in the Ottoman Empire. A syndicate controlled by the Deutsche Bank assumed control of the Anatolian Railway in 1889 and endeavoured to expand the project into the Baghdad Railway in 1903, eventually hoping to complete the "Berlin-Baghdad Express", a rapid link from the German capital into the heart of the Middle East.

The Ottomans commissioned the Hejaz Railway to connect Damascus to Mecca. Largely built with German technical assistance, the railway was completed as far south as Medina in 1908, whereupon construction ceased.

The proposed Eastern Anatolian Railroad was to connect the Black Sea port of Samsun with Mosul, so linking up with the Baghdad Railroad. This project, spearheaded by the Ottoman-American Development Company (OADC), was enthusiastically backed by the Taft Administration. While the venture attracted impressive financing, its attempts to gain a concession from the Young Turk regime from 1909 to 1911 proved futile, and the project withered. It appears that German pressure from behind the scenes killed the scheme.

While the present hectographed map is not executed with planimetric accuracy, it aptly illustrates the geo-strategic essence of the situation. The routes of the Baghdad Railway (heightened in orange crayon) are shown as of ca. 1910: by this time the line had been completed as far as Eregli (in 1904), but had become bogged down in crossing the Taurus Mountains (something which would not be accomplished until after World War I). The projected route is shown to continue to its maximum envisaged extent, all the way to Basra and Kuwait City. The route of the Hejaz Railway (heightened in blue crayon) is shown to be completed down to Medina, while the projected extension to Mecca and a branch line to Rabigh are also delineated. Meanwhile, the proposed route of the U.S.-backed Eastern Anatolian Railroad is show in the upper right, crossing from Samsun, down through Sivas and Diyarbakir to Mosul. 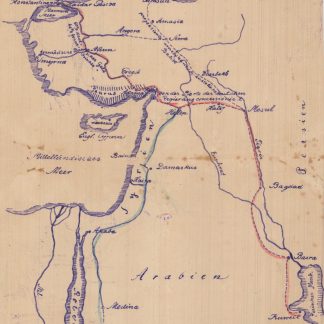