The largest and most detailed Ottoman-printed maritime distance chart, featuring the distances between numerous ports in the Mediterranean, Red Sea, Arabian Gulf, the Indian Ocean and the Asia-Pacific region. The larger chart in the lower left corner lists the ports in the Mediterranean, the chart in the upper right names the distances of the ports on the Arabian Peninsula, in the Indian Ocean, in China, and all the way to Nagasaki, Japan.

Mentions the ports from Suez along the west coast of Saudi Arabia, El Tor, Al-Waih, Yanbu, Rabigh, Jeddah, Al Lith, Al Qunfudah, Jazan, Aden, the ports on the south coast of Yemen, the coasts of Oman, Qatar, the east coast of today's Saudi Arabia, and Kuwait. The list of names continues with the ports along the Persian coast to India and China (with Hong Kong and Singapore), ending with Nagasaki.

It is worth considering that the first Ottoman pilot of the Red Sea, which was also the first pilot of the area written by a Muslim, was published in 1891. 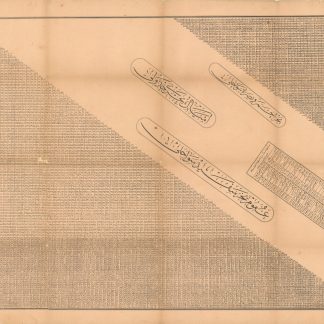