The Ottoman ambassador in India

8vo. 293, (1) pp. Ottoman Turkish in Arabic type. With 17 reproductions of pen-and-ink drawings, 15 of which full-page, a headpiece, as well as a folding map of India and a folding table of type specimens. Contemporary red half cloth with giltstamped spine and printed title to upper cover, table of contents to lower cover.

An informative account of diplomatic travel describing a journey by the Ottoman ambassador, Sirvanli, to India, illustrated by lithographic reproductions of pen-and-ink drawings. Rich in detail, they show Hindu temples, ports and city views, while the folding table of script specimens shows the alphabets of Sanskrit, Brahmi and Devangari and their pronunciations in Latin and Arabic alphabets. The travelogue begins with the journey from Istanbul to India by ferry, and goes on to describe Indian cities including Bombay, Poona, Jaipur, Calcutta, Delhi, Lahore, Ceylon, and Madras, as well as Kashmir, Afghanistan, and Kabul, and gives an account of Mecca, which the diplomat visited on his way home. Reflecting on the cities' names and origins as well as on peoples' customs and traditions, the book also mentions a meeting with Sayyid Ahmed Khan, the founder of Aligarh Muslim University, one of the first institutions of higher education in British India. 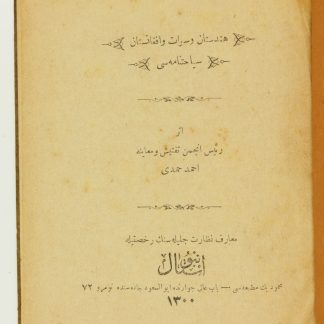